In this tutorial, we will create our own snowing effect in scene. I must say that, you can use “Light Snow” system in standard assets of Unity. We will create a snow effect with it too at the end of this post but first I will show you how to create it manually. I guess you see the “Particle System” in create menu. Do you know how it works? when you add a particle system in scene, you get an object just like a cube or sphere but it includes many particles. These particles move upward as default. Change its angle and make them move downward like snowing.

It is like snowing ha? Nope. It’s just some idiot sphere things fall effect. Now we’re going to edit their movement. When you select particle system, you see some features under Particle System title in Inspector window. 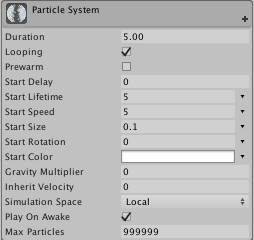 In this feature window, you can edit time options, color etc. For its color, we use white because snow is white. Anyway, you can change these values and you can see how they work. In this tutorial, we need to change Max. Particles value. 999999 value gives us a snow effect like blizzard. You can use lower or higher values to change snowing density. Lets take a look at other features. 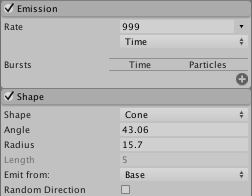 Rate value in Emission is also affects snowing density. Be careful, if you give a very high value such as 99999, your program can be locked and you may lose your progress. 999 is enough for a snowing effect. Cone shape is fit for this effect. Edit its angle and radius for your scene.

Now give a real snow view to our particle system. Change material with a snow flake image. I use a standard image. That’s all.

As I said, you can use the ready-to-use snow effect of Unity. Import particles package and add Light Snow particle system in your scene (Standard Assets>Particles>Misc>Light Snow). Change its values as seen below.